Dada. What is dada?
Asking what dada is is a bit like asking what punk is, in that some people will say it’s a specific kind of art, whereas other would suggest it’s a state of mind. Dada doesn’t have a specific style or medium or technique; it is a grouping of different artists from different countries unified in their manifestos and ideologies.

In Zürich, Switzerland, an art scene started around the Cabaret Voltaire in 1916. It was half way through the First World War and, to these artists, the world had seemed to plummet into absurdity. Artists from each side of the war and different countries came to Zürich, which was neutral. They proposed that the absurd world around them needed new, fittingly absurd art. They believed that the existent ideas of art were too far from life, too conservative and traditional, so they chose to sweep away the past and present their own ideas of what art should be. In some way, if you ask what dada is, you just get “what is art?” back.

They did a lot of radically different artistic experiments from the beginning, including poetic recitals in multiple languages with multiple people speaking at once, poems in made up languages, later came paintings, photomontage and ready mades.

It is also worth noting that throughout this period of war, the world was changing radically politically, too. There was a lot going on in this time and the political instability and Russian revolution also served to exemplify why the art should be so revolutionary and also make a fitting, radical change.

The revolutionary Russian artists, since 1913, had been busy with constructivism and, two years later, suprematism, with artists like Vladmir Tatlin with his tower, Alexander Rodchenko, Kazmir Malechich with his suprematist geometrical shapes, and, later, El Lissitzky with his iconic ‘beat the whites with the red wedge’. This permeates into the visuals of dada.

Dadaists expressed their contempt at the world around them, the war it was in, the politics, the bourgeoisie, all through art. Some photomontages were satirical and some works, like Marcel Duchamp’s ready made ‘fountain’ (a urinal) were exhibited as an affront to the expectations or art.

There was a common theme of lack of control in the art. Newspaper clippings would be dropped, torn paintings would be dropped, cut out words would be dropped and their arrangements would be recorded as art. Methods and techniques over which the artist has little control, such as automatic drawing where one does not look at the piece as it is being created, results which weren’t reproducible and processes providing unexpected results were all experimented with. It was like the war had torn down the walls of restraint and people could try anything. All their artistic endeavours were so different to those that came before.

It was also a great time for typographic art, with letters strewn excitingly and missaligned for effect. Graphic designers to this day use the same styles of lettering for effect, and punks used the ransom-style newspaper-print-text cutting-and-pasting technique extensivley, amusingly refering to a formerly established art style with their anti-art and anti-establishment statements.

Wer sind dada? Which people were involved in this movement?
In the begining, Hugo Ball, the eccentric looking man in the funny outfit seen earlier, created the Caberet Voltaire. He was more of an intelectual type than a visual artist and contributed to journals and wrote ‘sound poetry’. In his club convened numerous artists integral to Dada. They were:

–Marcel Janco
Janco was involved in numerous art styles, from expressionism and post impressionism to surrealism, constructivism and cubism. He submitted work in magazines and later became an architect but produced many paintings.

–Tristan Tzara
A performance artist, poet and general promoter of Dada who had, acording to Ball, attended the opening night of Cabaret Voltaire. This is his instructions of how to make a dadaist poem:

– Hans/Jean Arp. (Depending on if he was speaking German or French)
A collagist, sculptor and engraver. Though also a poet, he was probably the most visually artistic of the Zürich dadaists. He produced a range of simplistic art and was very experimental for the time. His work was abstract. (see automatic drawing earlier)

After this scene in Zürich, and after the war, dada moved to Berlin, a place I find to be very culturally rich between the wars. Here are some of the Berlin dadaists:

–Richard Huelsenbeck
Huelsenbeck was a german poet and writer who sort of carried dada from Zürich (he was friends with Hugo Ball and had attended Cabaret Voltaire) back to Berlin and aranged, organised, promoted and recorded the happenings. He became a journalist and psychoanalyst and had a few publications about Dada. He wasn’t an artist but produced a couple pieces

–Kurt Schwitters
Schwitters did painting, writing, typography, collage – mediums associated with dada. His collages were multimedia and implemented the typography favoured by dadists and some photomontage. Some of his works were collages of rubbish and found objects, a bit like 2D assemblage. Some people thought his work wasn’t politically charged enough and he was criticised for this.

Going from substanceless art to commentative art, Neue Sachlichkeit (New Objectivism) was a somewhat satirical German artistic movement between the wars exposing the problems in society. Subject matter often included ridiculing polititcians, portraying  the deformed veterans of the first world war, and the decadance occuring in the Weimar Republic. The art, despite it’s exaggurated style, was intended to reflect things around the artists exactly as they are, rather than sugar coating the world and painting the parts that were picturesque. This links strongly with Dada in the intent of revealing something new about the world and disregarding the traditions of art to create something novel and radical.

-George Grosz (Neue Sachlichkeit/ New Objectivism)
Grosz fell into the category of New Objectivism, despite definitely being part of the Berlin Dada movement. He created charicature-like images and provided social commentary typical of that of a New Objectivist. Other New Objectivists include Otto Dix and Max Beckmann. He also worked with photomontage, as will be adressed later.

– Johannes Badeer.
Taking the shock value to a new level, Badeer didn’t do much else. He gave public performaces and manifestos, and was at one point arrested for blasphemy. He called himself the Oberdada and had manic depression, exrpessing itself in sometimes absurd behavouir, and some of the other dadaists didn’t like him or consider him a true representative of dada. He also announced his own death and ressurection.

–John Heartfield
I decided to study Heartfield last year in my final major project to show his influence on the art group Neue Slowenische Kunst. The work I studied then is his most famous – his satirical pieces directed at fascism. Before that though, introduced to dada through Grosz, he produced many photomontages (some with Grosz) and, when he took photomontage up, burned his oil paintings. 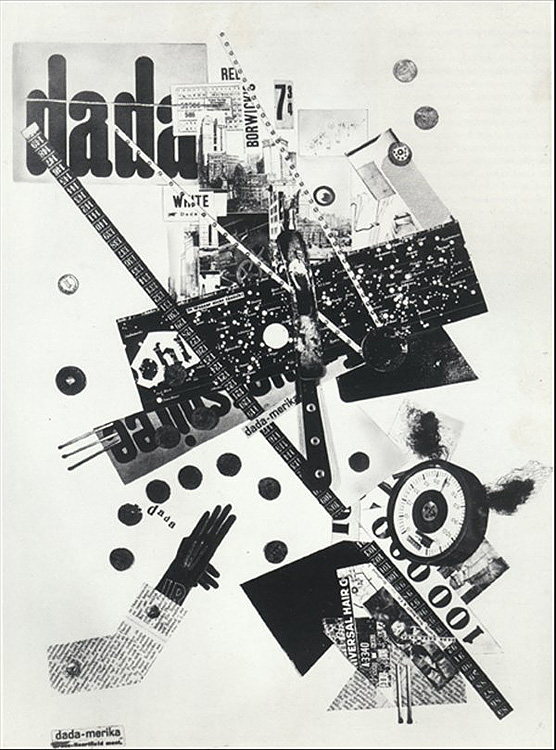 -Hannah Höch
Hannah Höch was a pioneer of photomontage, though she also madde collages, watercolours and woodcuts. Her highly satirical, funny and carefully aranged photomontages are some of the most notable dada works and, in my opinion, are very archetypal and indicative of what the movement wanted in their art. Höch’s works were influenced by the fact she worked for many years for a magazine, like many women at the time she was involved with textile production, and simply that she was a woman. There are feminist themes in her works and she was overshadowed by her male counterparts, trying to encourage other women to take up creative fields.

Also known simply as “Cut with the Kitchen Knife”, this piece, though uncharacteristic of Höch in it’s size (it is 90 x 144 cm, larger than her usual collages), demonstrates the spirit of dada’s photomontages brilliantly. In the left, there is dada (artists, communists, radicals and other forward-thinking people), and in the top right, there are figures of anti-dada (political figures, figures from the old government and Kaiser Wilhelm II). Throughout the piece, there are small scenes occurring, such as the wrestlers on Wilhelm’s moustache, all the dada artists in the bottom right and the masses in the bottom left. Höch made the piece by taking parts of a newspaper showing the political turmoil Germany had fallen into after the war, with the fall of the old Weimar government and the new, far left and the lack of order. She took this disorder, cut it all out, and rearranged it in a way that made sense to her, restoring order with her chaotic collage – a perfect synopsis of what dada wanted. It was very well recieved- in the international Dada show of 1920, this peice was one of the most renound. The map featured in the bottom right shows the countries in which women could vote at that point. The title suggests women being in the Kitchen and men drinking Beer and demonstrates frustration with the world at the time, the role women played in it, and the old holding back the new.

Punk, as I’ve mentioned, is perhaps the most obvious. Where better to base the aesthetic for your anti-art, anti-establishment, revolutionary art than in people who’d already done it? But it wasn’t just the ransom lettering that was taken.

Gee Vaucher produced similar photomantages of politically charged dioramas critiquing society with a dry sense of humour and sometimes crude imagery, perfectly fitting to Crass’ music (they’re one of my favourite punk bands) making statements against pretty much everything and being very cynical.

This example is less politically charged, though could still be seen as arguing the place of women in regards to housekeeping and sexuality, reflecting Höch’s feminism.

As for music that sounds directly influenced by dada, John Cage is often sited, though I’ve personally never listened to him until right now. I’m currently listening to “Living Room Music” by him which is largely a percussion track intended for parts of your house – windows, magazines, table, books etc. the other aspect being a speech quartet. with overlaying speech. Listening to it, the second song, “Story” reminds me strikingly of NNNAAAMMM by Einstürzende Neubauten which also features speech overlapping itself and interacting interestingly as parts are repeated, with industrious objects used for making noise. Another artist uninspired by Dada but reminding me of it is Karlheinz Stockhausen, who composed music also for unexpected instruments, but even more abstract with it’s interjections of sound. I find him the most difficult to enjoy.

Dada were rebels who tried many new things to reinvent art and express their distaste of the world around them. They did this very successfully and inspired artistic pursuits for decades to come.