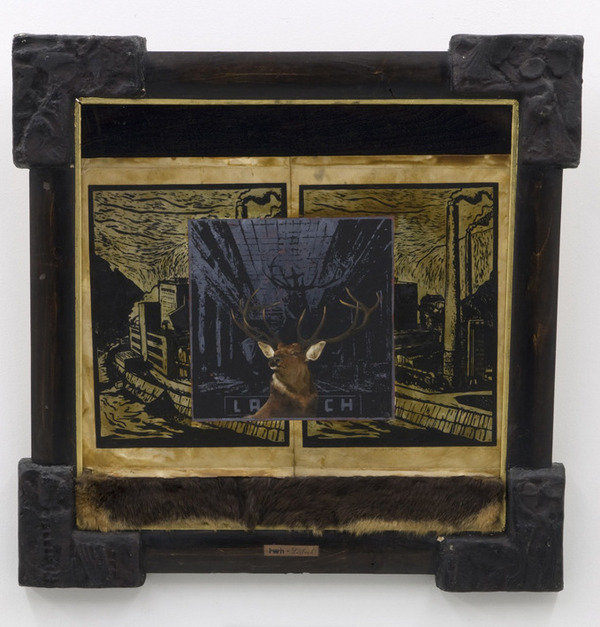 First, as always, my favourite, the art collective of NSK (I’m including IRWIN, Laibach kunst and Novi Kolektivizem in this because I can’t pick any one division). This is going to be a mess – I have so much to say about this group, and no way of structuring it.

I wrote a fair a

mount about NSK in my final major project for art last year (they were half of the subject matter), but it’s refreshing to be able to just lightly write about them online instead.

I’ve gotten used to quickly (and therefore never completely) summarising this art group to the uninitiated. NSK (Neue Slowenische Kunst (New Slovenian Art)) are a collective of Slovenian artists that specialise in what they call “Retroavantgarde”, a process in which they take pieces of art from history that hold a strong amount of identity, be it political charge or religious or national sentiment, and then re-purpose it for their cause. They’re like an embodiment of that phrase “good artists copy, great artists steal” – they don’t just steal things, they completely turn them against their original meaning.

The collective is inextricably tied to the music group Laibach, who are the musical group therein. NSK is it’s own state- the group produces every form of art and media needed for a state in a completely totalitarian matter, pushing this to the point of satire (though to call them satirical is a massive simplification). They create news, graphic art, fine art, music, plays, hold Citizen’s Congresses, issue passports to their citizens and party books to their party members, they hold exhibitions and concerts across the world, etc. I intend to apply for my NSK passport as soon as I have the money.

I was first introduced to this all (introduced? inducted? assimilated?) about three years ago when my friend (a German WWII reenactor, which will make sense later) showed me the video for Laibach’s “Life is Life” (a cover of the same song by Opus – a very popular and sickeningly cheesy European hit). I instantly had a new favourite band.

This music video alone goes some way to describing what it is NSK do, but with music instead of art as the medium. In these early videos (mid to late 80s) they mix a lot of conflicting elements of identity. There are elements of fascism, totalitarianism, Nazism, Communism, Germanic identity, Slovenian identity, Slavic identity, mysticism, castles, adventure, war – it’s all just thrown in and comes out as a garbled mess which leaves everyone questioning what they actually believe. The videos seem to give you the idea that you don’t know who these men are, where they’re from, or what they stand for, but they capture both the euphoric strength of propaganda and the dark underside of totalitarianism. Watch out, bud. It’s Laibach.

NSK steals a lot. Laibach do a lot of covers, and even when it’s original music, everything they produce seems to be a reproduction or comment on something pre-existent, or is full of samples. Same goes for the art. NSK art takes endlessly from art that’s come before it.

This picture is of IRWIN looking at some of their own art, but it is so obviously stealing from the Dada exhibition with the effigy of a German officer with a pigs head hanging from the ceiling.

As for the art shown in their exhibitions, a lot of it is similarly Dada-esque, taking paintings and photos from history and repainting and reworking to make you question its meaning.

Deconstructive piece analysis, from the outside in:

A lot of the frames are like this. The rawness of the corner pieces give the artworks a cohesiveness when displayed (since they almost all share this) and a sense of workmanship and labour. Laibach is a fundamental industrial band, and the art as well as music has roots in industry. Trbovlje, where Laibach are from, is an industrial mining town that was heavily communist.

The very frame makes human force and industry present. From here, the dark wood. a lot of NSK kunst looks as though it would belong in a lodge somewhere, nestled in a mysterious mountainside, where people hunt deer, plan revolutions, work in forges and mines and edelweisses grow everywhere (that kind of thing) and this kind of overpowering dark wood strengthens the impact of all their art.

Then the fur. NSK use a lot of mixed media in their paintings, grounding the pieces firmly in the landscape in which they were made. Materials used in some pieces include coal, mud, sticks, string, fur, blood (human or not I’m unsure) and lego bricks (there’s always a tongue in cheek sense of humour). You can also purchase soap from the online Laibach WTC website which allegedly contains sweat, saliva and semen. Quite often, NSK and IRWIN exhibitions include mounted taxidermy animals, which I think furthers the link between the art and the landscape and pushes this hunting lodge kind of aesthetic I was talking about. The weathered paper (?) that everything seems to be mounted on feels worn, homely and old, adding to this feeling.

The next aspect is the linocut prints. This is the real meat of the picture in my view. This linocut is part of the “red district” series of linocuts of the industrial districts in and around Trbovlje, created by Janez Knez (father of Dejan Knez, a founding member of Laibach) made in the mid to late 80s. Due to NSK keeping all of their art anonymous and impersonal, with each piece serving the mass without credit to individual creators, Knez is unaccredited, though with a little digging you find that they are indeed his works. These linocuts fall under Laibach kunst.

I love Knez’s linocuts; a lot of the rhetoric behind NSK statements related to industry revolve around alienation and I think these linocuts show a strong, alienated and estranged-feeling depiction of the landscape and it’s detachment from the nature surrounding it. There’s something immediate and unsettling in these images – you wouldn’t call them happy, they’re not like a postcard promoting the place, they seem melancholic and almost a little deranged, primitive, stark. I like stark as a way of describing these images because they are indeed severe and blunt, but stark is also the German word for strong, and I think a lot of strength is shown. Something about linocutting lends itself to this feeling, and as such it is one of my favourite mediums, and perfect for depicting heavy industry and alienating brutalist forms, which are some of my favourite subjects for art.

In front of these linocuts lies the front cover to Nova Akropola by Laibach. The front covers of Laibach albums and promotion for them tend to fall under the responsibility for Novi Kolektivizem. I can’t for the life of me find it, but there was an article online about this cover talking about the different things they stole from. While I can neither find nor remember that specific source, this room is the Reich’s Chancellery Mosaic Hall as designed by Albert Speer for the third reich, and the deer is from Monarch of the Glen, by Edwin Landseer. NSK love to use deers a lot. On top of the cover which has a copy of monarch of the glen, there is painted another copy of monarch of the glen. Deers. I wouldn’t be surprised if that were deer fur, too.

I really like this piece altogether.
I think despite being a combination of some quite stark, alienating and downright-chilling imagery, mixed with hard industry, it all comes together as oddly homely and warm, giving that comfortable nostalgia-for-a-place-and-time-you’ve-never-witnessed kind of feeling that NSK do so well.

So this one Irwin piece completely takes a Laibach Kunst print and a Novi Kolektivizem print, which in turn steals from at least two other paintings. Everything is entangled, self referential, stolen, and littered with symbolism. Speaking of symbolism…

NSK like Heartfield so much they made a song in his name (well, his birthname) – Herzfelde. I would put a link here, but I can’t find one.

The work of Heartfield (Who I talked about in my “Dada:What?” post) appears repeatedly in NSK’s artworks, too.

I could write a lot more on NSK, but for now, I will stop here so I can focus on making more posts. Expect more in the future.